Harry Ell & The Summit Road
To the first European migrants the Port Hills posed a formidable barrier as the new arrivals struggled with their few possessions up the Bridle path from the port at Lyttelton. Once at the summit, however, even these travel weary folk must have been overwhelmed by the glorious vistas all around them. Ahead, across the Canterbury Plains they would have been struck by the splendour of the Southern Alps, stretching range upon range as far as the eye could see. As they glanced behind them the hills that shelter the calm waters and charming inlets of the Lyttelton basin parted here and there to disclose intriguing views of Lake Ellesmere and the broad Pacific beyond.

Pioneer Women’s Memorial at the top of the Bridle Path.

Harry Ell was fascinated by these hills. He was a public-spirited man, and a lover of nature. In many ways he was ahead of his time as a conservationist determined to protect the remnants of the natural flora. In his dedication to preserve what was best, he had the brilliant idea of involving the public by ensuring that they had access to the whole area. Thus arose the exciting concept of a highway, together with walking tracks, along the summit of the Port Hills, and indeed extending right around the peninsula, with rest houses spaced at easy intervals.

To this end Ell cut short a hitherto successful political career in order to devote the rest of his life to the pursuit of his dream. Overcoming political difficulties and incredible financial constraints (development took place during the great depression of the 1920’s and 1930’s) this remarkable man had laid the foundations for the Summit Road and its rest houses as we see them today by the time of his death in 1934.

Read Harry Ell of the Summit Road, a collection of thoughts by his grandson John Jameson, founder of the modern Summit Road Society in 1948 – which was formed virtually at the request by the then director Morris Barnett of the City Council Parks Unit. Since then the Society continues to maintain a virtual partnership with the Park Ranger staff of the Christchurch city.

Apart from the Summit Road itself, the Sign of the Takahe is the most outstanding monument to the memory of Harry Ell. This is the first rest house encountered as the traveller leaves Christchurch by Dyers Pass Road. The ornate “baronial late-gothic” structure is undoubtedly an anachronism, but it would be a sad error simply to dismiss it as some of sort of architectural freak for this reason. 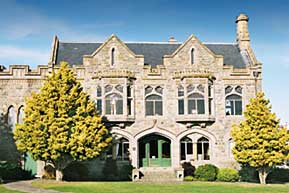 In the first place this striking building was constructed against all the odds, employing many highly skilled craftsmen who found themselves out of work during the depression. Materials, sand tools were scrounged, salvaged, and improvised in a manner that would not be unfamiliar to pioneer New Zealanders, but on a scale that was truly monumental.
For example, the great kauri beams that are such a splendid feature of the lounge were salvaged from a former bridge across the Hurunui river. The historical friezes in the memorial room were made from packing cases, and the stone work of the building was quarried and brought down from the surrounding rocky outcrops. Even the tools that the craftsmen used were, in many cases, forged on the site from scrap metal.

These few examples give some idea of the difficulties that had to be faced. Equally remarkable is the fact that Harry had never been to Europe or seen the architectural masterpieces of the era he wish to evoke with this building. However, he had read widely and greatly admired the skills, artistry, and craftsmanship embodied in such historic buildings. As for motivation, Canterbury was an essentially English settlement, and it seemed natural to let the building reflect this tradition. The heraldic embellishments include a section devoted to all Governors and Governor’s General of New Zealand as well as the arms of local families with links to the mother country, and other shields that embody English history.

Within this framework the Sign of the Takahe succeeds quite spectacularly, and has rightly become a well-loved landmark and a Christchurch tradition in its own right.

Of the other rest houses planned, only the Sign of the Kiwi at the junction of Dyers Pass and Summit Roads provides refreshment for the modern traveller. However, further south are the remains of the Sign of the Bellbird which was a tearooms from 1916 to around 1940 and now a welcome and well-used shelter above Kennedys Bush, and Sign of the Packhorse above the Kaituna Valley is in regular use as a trampers’ hut. 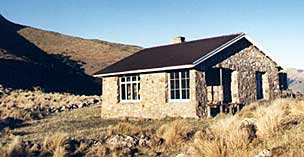