Introduction
The Port Hills are one of the best loved landscapes of Christchurch and their soft signature skyline provides the scenic backdrop for the city. People enjoy the Port Hills in many different ways, from scenic drives to picnic lookouts. Walking, running, mountain biking and road biking are all very popular. Botanists explore the crater rim forests, rock climbers dangle down the sheer volcanic bluffs, and paragliders soar high over the tussock slopes. Public and private reserves on the Port Hills run in almost a continuous line from Godley Head to Coopers Knob. 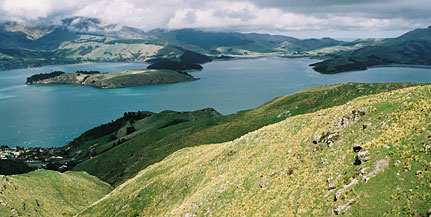 View of Lyttelton Harbour looking south towards the Head of the Bay, with Quail Island in the foreground.

Landforms
The volcanic shape of the Port Hills is very apparent even at a distance. Close to, this impression is confirmed by the obvious lava flows that are exposed in cliffs and road cuttings around the peninsula. These features are so clear and so distinct that it is surprising to discover that geologists date the last volcanic activity in this area at nearly six million years ago.

In fact the main volcano that contributed most to the local landscape, and which was centred roughly on Charteris Bay, was active some twelve to nine million years ago. At that time the volcano formed an island, because the connection to the mainland came about only in the last 20,000 years. Two younger volcanos (Lyttelton and Akaroa) ceased erupting 6 million years ago and the three make up what is now Banks Peninsula.

Built up layer by layer over millions of years, the massive volcanic cone of the older volcano was probably more than 1500m high at its maximum development, whereas the highest feature in today’s landscape (Mt Herbert) is a mere 920m high. From the time that the volcano became extinct, wind and rain, streams and rivers, together with the relentless washing of the sea, have reduced its size and changed its shape to lay bare most of the features that we see today.

View north from Mt Herbert (918m) of the Port Hills with Pegasus Bay beyond.

A sequel to the Ice Age provided the one exception to this continuous process of attrition. Glaciers covering the Southern Alps during the Ice Age ground rocks down to silt and sand which were deposited on the plains. Then, as the ice eventually receded, winds swept across the barren landscape left behind, and created enormous dust clouds of the finely ground material. This wind-borne dust was deposited as loess up to 20m thick in the gullies and across the landscape of the dead volcano. A thick layer of this fine fawn coloured soil, often fluted by rain-water, can be seen in many road cuttings such as the one towards the top of Evans Pass.

Because the exterior of the original volcano has largely been eroded away, many of the dominant features remaining represent what may be thought of as the skeletal remains of the great volcano. This is because the hardest rocks, most resistant to erosion, tend to be those that cooled slowly from their molten state without reaching the surface.

During eruptions great radiating cracks opened up in the volcano’s interior. There were infiltrated by molten rock which cooled slowly to form the structures know to geologists as dykes. Two enormous rock walls called the Remarkable Dykes were formed in this way. These are not on the Summit Road, but are a distinctive feature of the view looking towards the end of the harbour to the west of Mount Bradley. However, there are many exposed dykes closer to hand. Near the Sign of the Kiwi, for example, multiple dykes can be seen right at the roadside.

Sometimes dykes and other sources of molten rock actually approached the surface of the volcano. Then, if the molten rock was too viscous to flow outward, it accumulated to create the structures known geologically as domes. Castle Rock near the Summit Road above Heathcote, Conical Hill towards Gebbies pass, and The Monument above Purau are good examples of volcanic domes.

Finally, mention should be made of the oldest rocks in the peninsula, which form the basis of the rolling country where Gebbies Pass approaches the Head of the Bay. Here erosion has removed the volcanic overburden to leave exposed ancient rocks that were formed beneath the sea some 240 million years ago.

The area embraced by the Summit Road was not one of major importance to the Maori. To the north the great pa of Kaiapohia by the Ashley river mouth was the most important settlement, and probably an important link for the trade in greenstone from the West Coast. To the south Maori settlement centred around the well fortified pa of Onawe peninsula in Akaroa harbour.

However, at the time of the first European settlement there were scattered villages occupied by the Ngai Tahu people in the present area of Christchurch city and at Purau, Ripapa Island, Governors Bay, and Rapaki. It seems probable that the present Rapaki Track over the Port Hills to the plains follows the main route favoured by the Maori.

As to pre-European history, it is difficult to distinguish between fact, tradition, and legend. It seems certain that Maori settlers arrived in this part of the South Island very shortly after the great migration. Two tribes, te Rapuwai and Waitaha, figure in this area during the moa-hunter period. Then a northern tribe, Ngati Mamoe, came into the picture and were probably in this area for, about 200 years. Their place, in turn was taken by the Ngai Tahu, who also came down from the north, and had been in residence for about 150 years at the time the first Europeans arrived.

Legend has it that the Ngai Tahu conquered the Ngati Mamoe in bloody battle, but there is some doubt as to the relative importance of infiltration or warfare in the takeover. Nevertheless, legend is supported by the Maori name for the rocky heights above Lyttelton: O-kete-upoko means “place of the basket of heads”, which is said to refer to the triumph of the Ngai tahu chieftain Rangi Whakaputa who decorated the outcrop with the heads of the conquered Ngati Mamoe.