When the Polynesians came to Banks Peninsula most of the area was covered in forest. Tussock grassland and tea-tree scrub occupied only the most exposed tops and hardiest sites. The most favourable forested areas, such as flood plains and valley bottoms were occupied by high forest. The dominant trees were podocarps, mainly totara, matai and kahikatea, together with a variable mixture of hardwoods. Further up the slopes hardwoods such as lacebark, ribbonwood, tikoki and kowhai were more prominent and the podocarp component became scattered. In turn, these, associations gave way to Hall’s totara, broadleaf and horopito above about 500m.

As in podocarp/hardwood forests throughout New Zealand the great variety of ferns was a notable feature, an many of these survive today in sheltered gullies even outside the present forest remnants. These, too, deserve preservation as a reminder of what has been lost.

With the arrival of the Maori both deliberate and accidental fires took their toll of the vegetation over the next 800 years, but at the time of European colonisation some 70 percent of the area was still covered in forest. From then on, however, the rate of change was to accelerate to the point of near-total destruction. From the time the first sawmill was established in Robinsons Bay in 1854 until the early 1880’s virtually all the commercial timber had been cut out, and most of the remaining forest had been fired for agriculture.

Today the few remaining bush reserves give little more than a hint of what the original plant cover looked like. Some reserves such as Rapanui on Evans pass have been planted with a mixture of introduced and native species, but some such as Ahuriri at Cooper’s Knob are scheduled to be preserved and nurtured, (and, where necessary, judiciously replanted) to recreate as far as possible examples of original bush cover.

Fire and grazing animals and, regrettably, human folly are still the greatest threats to these reserves, but with good fortune and good management their fascinating and often unique plant associations can be preserved and even extended to the benefit of future generations. 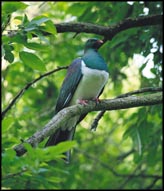